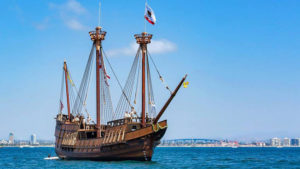 This is an annual springtime celebration sponsored by Casa De España and the Naval Base Point Loma (formerly known as the Submarine Base). The San Diego SAR Chapter and C.A.R. Red, White and Blue Society are invited to participate in this celebration by setting up a display tables in the bayside park where Spanish food is served and related activities occur. The flags and color guard at the tables attracts many of the celebrants to the tables to inquire about SAR and C.A.R. This affords both organizations an opportunity to inform the public about our interest in preserving the history of the American Revolution as well as Spain’s involvement in the war.
This base is considered to be the most scenic base that fronts on San Diego Bay. Access to the base is highly restricted and the Battle of San Diego Bay event is one of the few times the public is allowed access to the Naval Base. Historic structures constructed by the U.S. Army in the 1880s and submarines can be viewed on the way to event area.

The soldiers of Fo 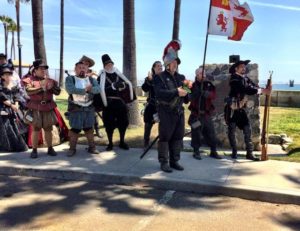 rt Guijarros fought a dramatic battle in defense of Spain’s newly acquired California territory. On March 22, 1803 the “Battle of San Die
go Bay” pitted the American brig Lelia Byrd against the Spanish soldiers of Fort Guijarros. This event is the only ship-to-shore battle on the Pacific Coast between Spain and a ship of the United States.
Caught attempting to smuggle sea otter pelts out of San Diego Bay in violation of Spain’s blockade against foreign trade, the Americans and Spaniards exchanged a spectacular cannon duel across the waves. With only minor damage, the crew of the Lelia Byrd escaped serious injury when favorable winds escorted them away from the line of fire.