Members of The Sons of the American Revolution (SAR) are direct descendants of those patriots whom achieved the independence of the American people. The objectives of the organization are intended to perpetuate a more profound reverence for the principles of the government founded by our forefathers and of their steadfast commitment to our nation’s success. Below the image is a brief history of SAR’s origins. 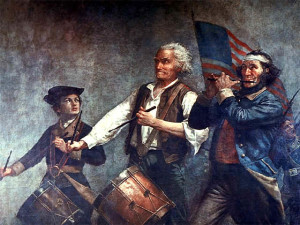 Sons of Revolutionary Sires
On October 22, 1875, Dr. James L. Cogswell, met with several Masonic lodge members to plan a march for the upcoming Declaration of Independence centennial celebrations in San Francisco. They chose Sons of the Revolutionary Sires as the name of the organization. The group attracted over 80 men who marched together in the city of San Francisco 4th of July parade of 1876. The group never formally incorporated and its numbers dwindled down to two or three semi-active surviving members when the call came from William McDowell and a group of New Jersey gentlemen to become part of the Sons of the American Revolution.

The Southern California Society. On Independence Day, in 1894, Mr. Daniel Cleveland, of San Diego, called together the sons of Revolutionary ancestors to organize the Southern California Society of SAR. Descendants of Revolutionary sires, residing in the counties of San Diego, Riverside, San Bernardino, Los Angeles, Orange, Ventura, Kern, Santa Barbara, and San Luis Obispo would be eligible for membership. The Society took an active interest in securing patriotic instruction in the public schools of San Diego County, the observance of Flag Day, and in having the national flag raised over the schoolhouses of San Diego.