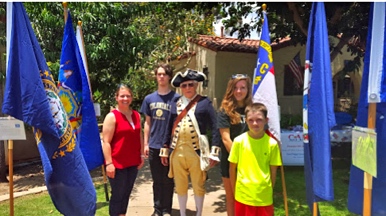 The Sons of the American Revolution (SAR) San Diego Chapter joined the House of Spain (Casa de España) in the fifth annual celebration of Independence Day in Balboa Park on July 3rd and 4th, 2016. This celebration also honors Spain’s role in the American Revolution and the San Diego Presidio’s financial contribution in 1780 to Spain’s war effort against England. The California Society of SAR dedicated a plaque in the City of San Diego Presidio Park honoring the financial contribution in 2005. In the photo to the right are Nicole Bednorz, Senior President, Children of the American Revolution (C.A.R.) Presidio Hill Society (left) and Philip L. Hinshaw (center) joined by Travis, Brooke and Tanner of the Presidio Hill Society. The Presidio Hill Society takes its name from the San Diego Presidio that was the first one constructed in California. The remnants of the Presidio are located in Presidio Park near Old Town San Diego. 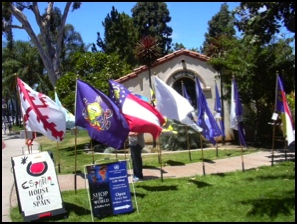 SAR lined the walkway leading to the House of Spain with the flags of the 13 colonies plus the Betsy Ross flag and the Cross of Burgundy flag in the photo to the left. The prominent location of the flags attracted the attention of visitors entering the park and caused them to stop and ask questions about the flags and what they represent. Approximately, 1,300 visitors toured the casita during the 4th of July weekend. Many visitors were amazed to learn that Spain was involved in the American Revolution. Visitors from the east coast often had their pictures taken with the flag of their state. 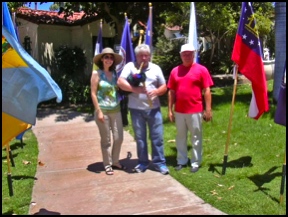 A big surprise this year was a visit by José and Isabel Dosal from Los Angeles. They were born and raised in Spain. He is an accomplished musician and plays the Galician gaita that is the traditional instrument of Galicia and in some parts of Portugal. The word gaita is used across northern Spain as a generic term for “bagpipe”. José played several songs that are typical of northern Spain. In the photo to the right, see Isabel and José Dosal with Jesús Benayas, President of Casa de España. Many visitors leaving the parking lot behind the Organ Pavilion stopped to enjoy the Spanish music. 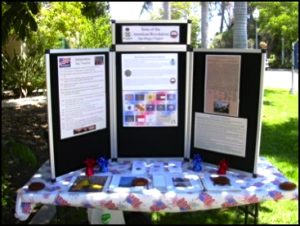 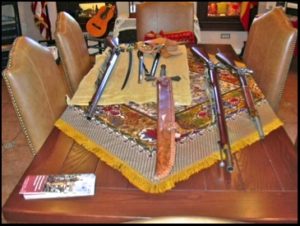 The San Diego SAR Chapter created a table display of information about the Declaration of Independence and the 13 colonies (see left), as well as handouts about SAR and the San Diego Chapter activities. Brown Bess muskets, several swords, and a powder horn were also on display. This display caught the interest of most visitors and many were surprised at the weight and length of the Brown Bess muskets (see right).