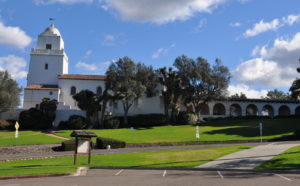 The San Diego History Center is excited to announce that the new Welcome Center exhibits for the Junípero Serra Museum are now in production and will be on display very soon! The new Welcome Center Exhibition is scheduled to opening in late February or early March, 2017.

Visitors will gain a new appreciation of the landscape surrounding the Serra and how various groups have existed in and around Presidio Hill throughout time and the interplay of the San Diego River over time. Leveraging the sweeping views afforded by the north-facing exterior terraces, new signage will highlight the importance of the river to inhabitants throughout history.

Funding for this exhibition is provided by the San Diego River Conservancy and State Coastal Conservancy through Proposition 84, the Safe Drinking Water, Water Qualify and Supply, Flood Control, River and Coastal Protection Bond Act of 2006.

In 2005, the San Diego Chapter of the Sons of the American Revolution hosted the annual California Society Sons fo the American Revolution Board of Managers meeting at a San Diego Old Town hotel. A major feature of the meeting was the dedication of a commemorative plaque at the Serra Museum (see photo to the right). The plaque honors the financial contribution of the Presidio Soldados and Native America to Spain’s war effort that assisted the colonies in winning the American Revolution. The plaque was mounted on the flag pole that flies the American Flag (see photo). The San Diego Chapter hosted a second CASSAR commemorative program at the Serra Museum during the 2011 CASSAR Board of Managers meeting. 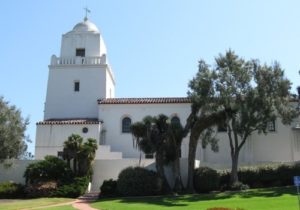