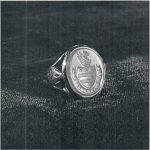 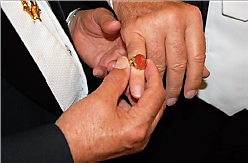 The single most valuable property owned by the National Society of the Sons of the American Revolution is not its Headquarters property nor even its Permanent Fund. It is a small circular object, about seven-eighths of an inch in diameter, which rests in darkness, untouched for three-hundred sixty-four days of the year, emerging for only one night annually when a new President General is installed. It shares its space in a safety deposit box with the deed to the SAR Headquarters building, an insurance policy, some stock certificates, and an affidavit about the ring’s own origins.

This precious possession is the seal ring owned and worn by General George Washington.

The ring itself is of gold, with a thin band and delicate shank. It is a perfect size ten on a modern mandrel. There is no maker’s mark or any inscription whatsoever on the inside. On each outer surface, the metal of the shank is deeply incised to give in raised relief a stem, three leaves, and a three-part bud or flower at the top, too worn to identify. The annulus of the crown is oval, surrounding and holding in place the setting of light orange carnelian in which is incised the Washington crest: a shield with three stars at the top and two transverse bands beneath; surmounted by a crown containing a griffin; underlain by a ribbon bearing the Latin words “​Exitus acta probat.”​ These words come from line 85 of the second Heroides of Ovid, and are translated literally as “The outcome proves the deed.” A common variation is “The end justifies the means.”

A seal made by the Washington ring would now show the griffin facing left and the words of the motto read properly from left to right. The original Washington crest, done in colored glass, can be seen in a window of what is now the buttery at Sulgrave Manor, the Washington ancestral home in Northamptonshire, England. 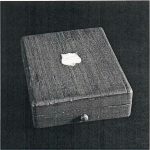 Almost as interesting as the ring is its original box, which was also used by General Washington. It is made of varnished wood, possibly birch or fruitwood, and measures three inches wide, three and nine-sixteenths inches long, and one inch high. On its cover is a shield, one inch long and three-quarters of an inch wide, inlaid of ivory, much crackled with age. A small brass knob at the front of the lower half controls the catch.

Inside, the lid is lined with lavender silk, now brown and hanging in shreds. A pin holds a card loosely in place in the top pad, stating, “General Washington’s Seal Ring. Statement and Affidavit under bottom pad.” The bottom pad is covered with velvet, once lavender, but now faded to brown except around a center post where the ring securely rests.

The original affidavit is now in the SAR safety deposit box and is preserved flat between two layers of plastic, because it is so fragile and cracked from being folded beneath the bottom pad. It gives the history and line of descent of the ring through the Washington family. Being typed, it is easily read. The original document is shown below. 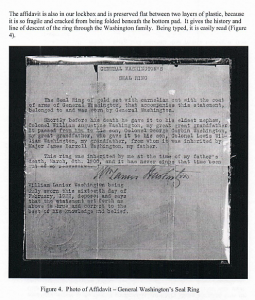 On the rare occasions when the ring is worn, it attracts the greatest of attention and excitement. People look at it with awe and almost reverence. Their greatest wish is to touch it. The ultimate thrill is to be allowed to slip it over the end of a finger and off again. Occasionally there is a skeptic who questions its authenticity, despite the affidavit of William Lanier Washington and the great care given by the SAR to the ring since 1922, when it was presented to the SAR. To these skeptics, the SAR can only give a very unscientific answer: when an individual puts it on his or her finger, feels that comfortable fist from decades of wear, and sees the inner glow of translucent orange radiance from the authentic Washington seal ring, that person knows the seal ring is real.

In the spring of 2000, SAR President General Howard Horne (1999-2000, 2001) contacted Balfour in North Attleboro, Massachusetts, to see if the company could make an exact replica of the George Washington ring that would be made available to future SAR Presidents General. Balfour responded that it no longer was in the replica business and referred the SAR to a company called Creative Molding, also located in North Attleboro.

Horne wrote to Mr. David Winn, president of Creative Molding. Winn told President General Horne it might be possible to replicate the ring but that Winn and his staff would first have to see the ring in-person. Arrangements were made for President General Bill Gist (1995-1996) to get the ring and travel to North Attleboro. Gist picked up the ring at the bank, put the artifact in his pocket, and flew to meet Winn. Gist has said many times that he was scared to death something would happen to the ring while it was in his possession. Fortunately, nothing happened.

The Creative Molding employees took the measurements, a mold, and generally did everything necessary to be able to see if they could replicate Washington’s ring. When they finished, Gist boarded a plane for the return trip and the ring was returned safely to its deposit box.

Approximately two weeks later, Winn called Horne to say that the company could not cut the stone in its facility. Instead, if Creative Molding was to proceed, it would have to contract a company in Germany to cut the stone and then make the appropriate carving. Winn said that process would take a couple of months and he did not know the potential cutting and carving costs. He gave Horne an estimate and was given the go-ahead. The German company prepared twenty stones and shipped these to Creative Molding.

About a month later, in February 2001, ten rings were shipped to the SAR Headquarters with the remaining ten in stock should additional rings be needed in the future. The first ten cost $1,200 apiece. Presidents General Gist, Horne, Russ Page (1998-1999), and Bruce Butler (2000-2001) received the first four rings. The SAR ordered the additional ten when Roland Downing was President General from 2005 to 2006, and these cost nearly $2,000 apiece. Each President General personally pays the cost of his replica Washington seal ring.

If the SAR needs additional rings in the future, Creative Molding will have to start from their mold and have stones cut and carved in Germany once more, just as before. President General Horne’s guess is that the rings will cost considerably more than those first ten rings. The replica of Washington seal ring is presented to the incoming SAR President General after he has had the original Washington seal ring on his finger for but a few minutes during his installation.

All living Presidents General are now permitted to purchase copies of the seal ring. These copies are not replicas as they are purposely made different in several respects from the original. Sardonyx, a much darker and more opaque stone than the original orange carnelian, is used for the seal. There are variations in the gold work and in the carving of the seal. On President General Horne’s copy, the gold work is not as deeply sculptured and the oval seal is smaller and darker. The griffin has a serpent’s tongue and streamlined wings on Horne’s ring. There is no possibility of confusing a copy with the original. Additionally, for each ring Creative Molding has replicated, the company also makes a seal ring box in which the ring is stored for the Presidents General. The replica box has the same dimensions, same type of locking mechanism, and the interior cloth material lining.

The value of the Washington ring cannot be expressed in terms of money. Who could place a price on such a rare and historic object? For security reasons, the SAR is not anxious for speculation or publicity on this subject. No amount of money could measure the mystique of this ring, or the special aura of grandeur, authority, and dignity it bestows upon the office of the SAR President General.